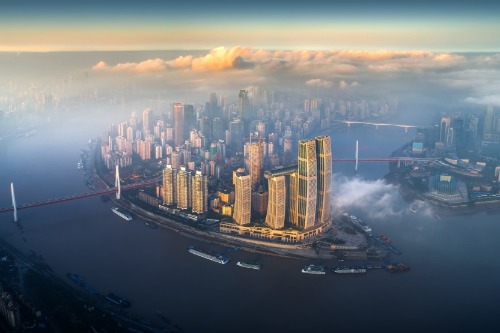 The Yangtze River takes a turn as the Jialing River flows into it in Chongqing. The Raffles City, a building complex in the shape of a sailboat, is one of the city’s iconic places. ZHANG KUNKUN/FOR CHINA DAILY

Editor’s note: This year, the Communist Party of China is celebrating the 100th anniversary of its founding. China Daily is publishing a series of stories looking at the tremendous changes that have occurred in provinces, autonomous regions and municipalities under the leadership of the Party. They also include stories of the people and places that have left indelible marks in the Party’s path to glory.

Chongqing will become a new center of growth and help drive the country’s high-quality development under the national strategy of the Chengdu-Chongqing Economic Circle, Chen Min’er, Party secretary of Chongqing, said in his article published in People’s Daily on May 28.

The municipality in Southwest China has progressed in all areas in recent years, establishing a clean political ecology, advancing high-quality development and speeding up inland opening-up, he wrote.

“Chongqing is a land of heroes with a glorious revolutionary history. In the past century, Chongqing people have achieved great victories one after another and Chongqing has undergone enormous changes under the guidance of the CPC,” said Chen, a member of the Political Bureau of the CPC Central Committee and secretary of the CPC Chongqing Municipal Committee.

“We have integrated national strategies into local development in order to better serve the country and push Chongqing’s overall development to a new stage with new development concepts in the new era,” he said.

The Communist Party of China will celebrate its centenary on July 1.

Located in the upper reaches of the Yangtze River, the city boasts key geographic advantages as a strategic pivot of the country’s development program for its western regions, as well as being a connecting point for the Belt and Road Initiative and the Yangtze Economic Belt.

During his inspection trip to Chongqing in 2016, President Xi Jinping, also general secretary of the CPC Central Committee, said the municipality was “full of promise” and would become an inland international logistics hub.

In 2019, Xi visited Chongqing again and said that the city should strive for new achievements and breakthroughs under the drive to develop the west of the country in the new era.

He said the area should continue to be an anchor of inland development, a driver in advancing the BRI and a leader in green development along the Yangtze River Economic Belt.

He stressed that Chongqing should promote high-quality development in manufacturing and lead the opening-up of the entire western region.

Since 1949, Chongqing has played an important role in the country’s development, from being a major industrial base to a national defense manufacturing area in the 1960s.

In 1997, it became China’s fourth municipality after Beijing, Shanghai and Tianjin. Covering 82,402 square kilometers and with about 30 million people, it is by far the largest of the four, even bigger in area than Ireland or the Czech Republic.

Chongqing has been creating a clean political ecology after completely wiping out such “pernicious influences “brought by Sun Zhengcai and Bo Xilai, both former Party chiefs of the CPC Chongqing Municipal Committee, as well as Wang Lijun, former police chief and vice-mayor, Chen said.

“We have built up strong positive energy for Chongqing’s development through the anti-graft fight and the study of Party history,” he noted.

Thanks to the good momentum in high-quality development, last year the city’s GDP reached 2.5 trillion yuan ($357 billion), 3.9 percent higher than the previous year, despite the impact of the COVID-19 pandemic. GDP per capita exceeded $10,000.

Chengdu, capital of Sichuan province, and Chongqing, the only inland municipality in China under the direct management of the central government, are jointly shouldering the responsibility to lead high-quality development in western China.

“Chongqing will do its best to work with Chengdu to build the regional economic zone into a new growth pillar and a powerful engine of China’s high-quality development,” Chen said.

So far, the two cities have signed 248 cooperation agreements.

Since 1999, the metropolis in Southwest China has been exploring new ways of opening-up for the western regions, which lag behind the affluent eastern coastal areas.

“We have spearheaded the opening-up of the western region and built an inland international logistics hub,” he said.

Chongqing is also the headquarters of the China-Singapore (Chongqing) Demonstration Initiative on Strategic Connectivity signed in 2016. It initiated the New International Land-Sea Trade Corridor project in a bid to speed up the opening and high-quality development of the western region. Now the trade passage can reach 304 ports in 102 countries.

As roughly 691 km of the Yangtze runs through Chongqing, the city has concentrated on ecological restoration and protection and avoided large-scale development, especially after Xi’s inspection tour of the city in January 2016.

“We put ecological protection as the priority of our work, and green development has become the focus of Chongqing,” Chen said.

“We will turn Chongqing into a pleasant place with clear water and green mountains.”

The water quality of the Chongqing section of the Yangtze is above average, the forest coverage rate reached 52.5 percent, and the number of fairly good air quality days increased to 333 days, he said.